The IRS revamps its ‘postcard-sized’ tax return, drafts a new one for 2019 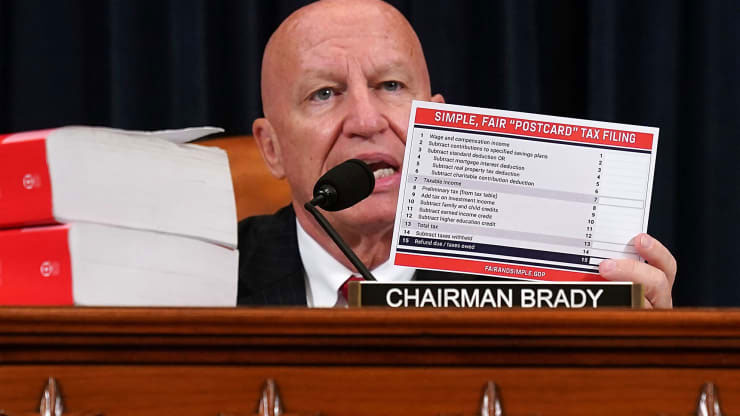 House Ways and Means Committee Chairman Kevin Brady (R-TX) holds up an example of the ‘postcard-sized’ form he wants people to use when filing their taxes during a markup session of the proposed GOP tax reform legislation in the Longworth House Office Building on Capitol Hill November 6, 2017 in Washington, DC.

That postcard-sized tax return is about to get a little longer.

The Internal Revenue Service has posted a draft of a new individual income tax return for 2019, updating the shortened form it had rolled out just last year.

This is the second overhaul of the 1040 form since a revamp of the tax code went into effect at the beginning of 2018.

Following the Tax Cuts and Jobs Act, the Treasury and IRS released the new “postcard” version, replacing forms 1040, 1040A and 1040EZ.

Though the form itself wasn’t quite postcard-sized, it was indeed shorter. But this didn’t necessarily reduce paperwork.

The shortened Form 1040 came with six schedules filers needed to tackle to complete their returns.

The IRS will work with the tax community to finalize its updated 2019 form over the summer, said Bruce I. Friedland, IRS spokesman.

“The changes make it even easier for taxpayers to file their returns,” he said. “The tax form continues to be shorter than the 2017 Form 1040.”

A Treasury official said the department still considers the 2019 draft of Form 1040 to be postcard-sized, adding that it’s 1.5 inches longer than the 2018 version.

See below for the draft of the new tax return.

The IRS is also consolidating its six schedules to three for the 2019 tax year. The agency has posted drafts of Schedules 1, 2 and 3.

Schedules 4, 5, and 6, which dealt with taxes on retirement plans, refundable credits and foreign addresses will no longer be in use.

The IRS is accepting public commentary on the new 1040 until Aug. 15, and anticipates it will have a final form by November, said IRS spokesman Eric Smith.

While the majority of taxpayers won’t be using the paper form to file their taxes — more than 131 million people e-filed their returns in 2019 — CPAs say they’ve used the paper form to review results with their clients.

In that case, the shorter 1040 created some confusion.

“Going through the 1040 was a lot easier when you had the majority of the information on the 1040 itself,” said Dan Herron, CPA and partner at Better Business Financial Services in San Luis Obispo, California.

These workers are maxing out their 401(k)
Couples borrow average of $11,000 for weddings
How to know if your portfolio is too risky

“Now we find that you have to go through the summary and all of those schedules to trace the numbers,” he said.

In that sense, going back to a longer form might make things a little more intuitive next April.

“Ultimately, if the new 2019 form reduces the number of additional schedules, that can only be a good thing from the practitioner perspective,” said Jay Porter, CPA at Porter & Associates CPAs in Huntington, West Virginia.